The NPB mission focuses work on improving the economic condition of US peanut farmers and their families through peanut promotion and groundbreaking research.
In addition to growing peanuts, Les and wife Laurie produce corn, cotton, sorghum, hay and cattle on their Custer County farm.  Les is the second Oklahoman to serve as Chair of NPB. Current board alternate representing Oklahoma is Gayle White of Frederick who previously served as Chair of NPB. Gayle and husband Joe D. grow peanuts and cotton on their southwest Oklahoma farm.

The development of the Oklahoma Peanut Commission website was supported by a grant from the National Peanut Board.

Les Crall, a peanut farmer from Weatherford and current Chairman of the Oklahoma Peanut Commission, has taken on additional responsibilities in support of Oklahoma and US peanut grower interests.   Les was elected Chairman of the National Peanut Board during the farmer-funded group’s December 2021 meeting. He will serve as Chairman during the Jan 1 – Dec 31, 2022 period. He previously served in Oklahoma’s alternate board position on NPB. 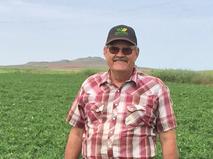